BBC Inside Out reveals newly discovered footage of Simon Keeling's bungee jump - the world's first - from the Clifton Suspension Bridge in Bristol 35 years ago.

BBC Inside Out reveals the newly discovered footage of the world's first bungee jump from the Clifton Suspension Bridge in Bristol 35 years ago.

The jump took place on 1 April, 1979, and was undertaken by members of the Oxford University Dangerous Sports Club. It led to the birth of a worldwide sport.

BBC Inside Out tracked down the footage, which has not been seen for decades, from the original jump in 1979. The film shows the Dangerous Sports Club practising in a garage on the morning of the jump. David Kirke jumped off the bridge in top hat and tails with champagne in his hand followed by Simon Keeling going over the edge in the second jump. 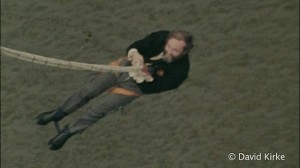 The final section of the video shows David Kirke being placed in the back of a police car.

The jumpers were arrested shortly afterwards and then released on the promise they would never do it again, but they continued with jumps in the US from the Golden Gate Bridge to the Royal Gorge Bridge, spreading the concept worldwide.

By 1982, they were jumping from mobile cranes and hot air balloons.

The Clifton Suspension Bridge, which was the location of the original jump, celebrates its 150th anniversary in December 2014.

Credit: The archive footage http://www.bbc.co.uk/iplayer/episode/b04nvp5r/inside-out-west-10112014  is courtesy and copyright of David Kirke.

Note: It is illegal to bungee jump from the Clifton Suspension Bridge in Bristol.

Inside Out West is broadcast on BBC One on Monday, 10 November at 19:30 GMT and nationwide for 30 days thereafter on the iPlayer